( For The Best German To English To German Translator Interpreter In India, Contact Us )

German is a West Germanic language that is mainly spoken in Central Europe. It is the most widely spoken and official or co-official language in Germany, Austria, Switzerland, South Tirol in Italy.

The German language is in many way similar to other languages within the West Germanic language branch, including Afrikaans, Dutch, English.

It also contains close similarities in vocabulary to Danish, Norwegian and Swedish, although they belong to the North Germanic group. German is the second most widely spoken Germanic language, after English.

German is the fourth most widely taught non-English language in the US after Spanish, French and American Sign Language and the second most commonly used scientific language and the third most widely used language on websites after English and Russian. The German-speaking countries are ranked fifth in terms of annual publication of new books, with one tenth of all books including e-books  in the world being published in German.

In the United Kingdom, German and French are the most sought-after foreign languages for businesses with 49% and 50% of businesses identifying these two languages as the most useful, respectively. 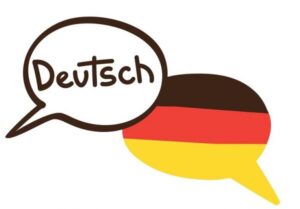 In terms of  business German was the language of commerce and government in the Habsburg Empire, which encompassed a large area of Central and Eastern Europe. Until the mid-nineteenth century, it was essentially the language of townspeople throughout most of the Empire. Its use indicated that the speaker was a merchant or someone from an urban area, regardless of nationality.

So no one can think developing his business industry without German and to meet this problem We, The Translingo World Private limited and it’s professional team are here to serve you in Delhi, Mumbai, Hyderabad and Kolkata.

The German language is very important for MNCs to boost their resources and market appeal. However, the owner of these companies may face hurdles because of the obscurity of the language. So, in these moments, no need to be worried, because the Translingo World and its experienced team are here to assist you in every circumstances in India and abroad.

We, the Translingo World Private limited, are the best translation company in India. We are capable to carter our clients with highly qualified, educated, and trained German translators in almost all parts of India.

We, the Translingo World Private limited, provide professional interpretation in Delhi and all major areas of India, particularly in Delhi, Mumbai, Hyderabad, and Kolkata.

It is our pleasure to affirm that  we, the Translingo World Private limited, and our highly-skilled, qualified, and  professional team provide Human,  accurate, and best professional translation from German to all major international languages and vice versa in Delhi, Kolkata, Hyderabad, and Mumbai,

For the Best German To English To German Translator Interpreter In India, feel free to contact us.